East Coast Skiing Is Stupid: It’s cold, it’s hard, and it’s the best in the country! 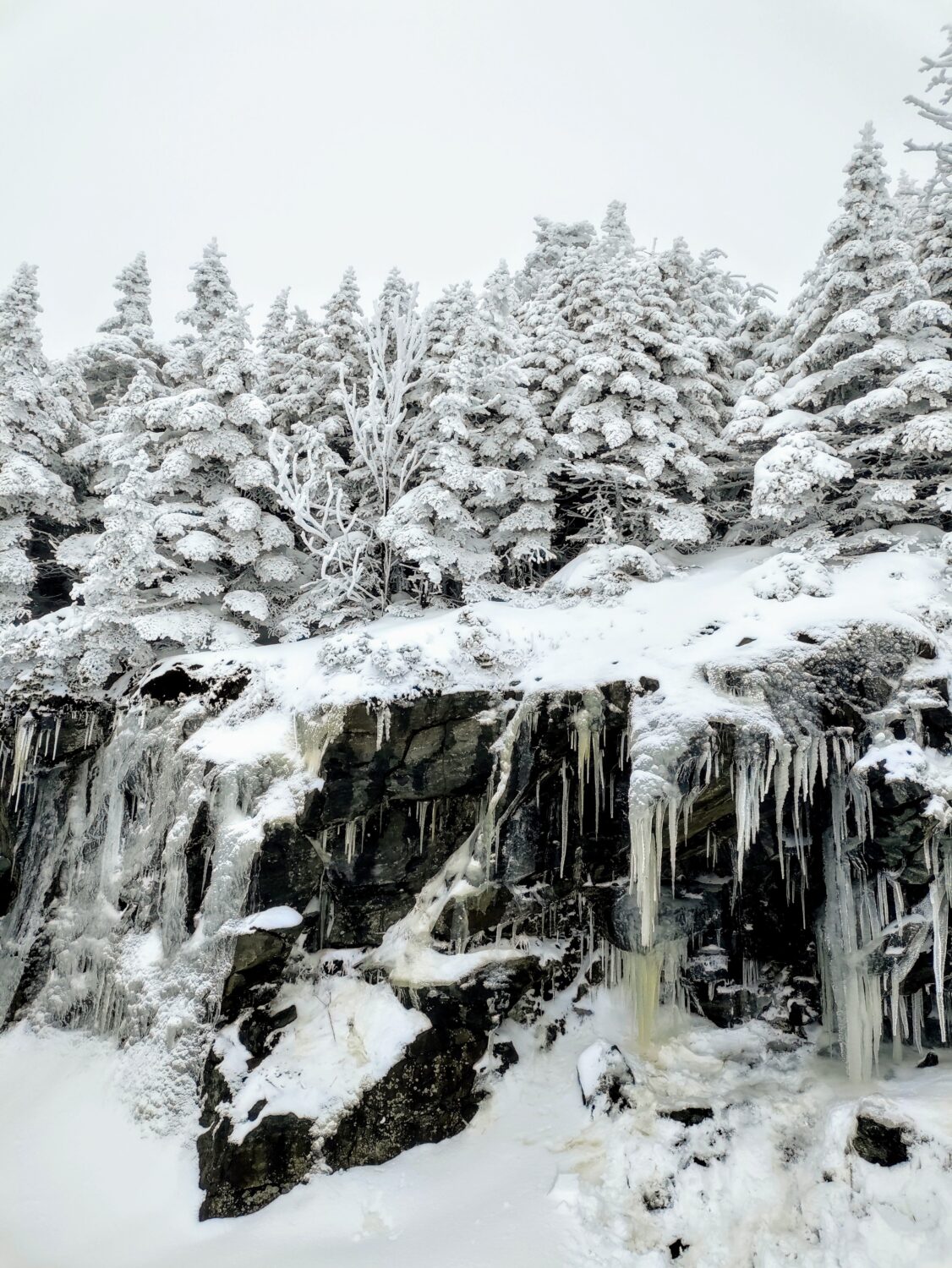 East Coast Skiing Is Stupid: It’s cold, it’s hard, and it’s the best in the country!

If you are confused by the title of this article, you are not the only one. Three years ago, I moved to New England from California. Amongst the many lifestyle adjustments I had to make, I also had to change my outlook on skiing. Drives from San Francisco to Tahoe were swapped for excursions from Connecticut to Vermont, New Hampshire and Maine. Desperately in search of some decent turns, and to find the true meaning of “Ski The East”. As it turns out East Coast skiing is stupid. It’s cold, it’s hard, and it’s the best in the country!

My very first lift ride on this side of the country was at Stowe. It was mid January, and as the doors closed on the gondola, I was thankful to be shielded from the wind already, and hadn’t even had my first run. A woman, twice my senior, sat across from me and my two buddies. With a sly smile about as warm as the wind-chill, she said, “beautiful day today, huh? It’s like spring skiing!” I chuckled into my jacket pulled up to cover my chattering teeth. No, laughs were reciprocated, so I bit and rhetorically asked, “You’re kidding right?”. “Not at all. You should’ve been here yesterday. It was -20 F or so.” She was serious, and she was serious about her skiing. New England die hards do their best postal carrier impression on a daily basis. “Neither snow nor rain nor heat nor gloom of night stays these couriers from the swift completion of their appointed rounds.” Only for skiers in these parts, they may face all of those conditions in a single day, if not a single run.

The weather and the mountains here are just built different. Slogans like “Born from Ice” ring true and loud. It’s worn like a badge of honor among these parts. Because if you can’t handle the weather, you sure won’t be able to handle the skiing. Stowe’s avg. temp in January is 17 degrees. And sure it’s winter, but compare that to Jackson Hole’s balmy 28 degree average temperature and you start to see the picture clearer.

Over in New Hampshire on Mt Washington, the East’s iconic and highest peak, Tuckerman’s Ravine offers steeps worth the pilgrimage. But, there’s a reason it’s a spring destination. The winters there offer some of the wildest and worst weather on the planet. Hurricane force winds occur an average of 110 days per year. The weather station on the peak is an arctic outpost recording records winds of 231 mph and, and wind chills regularly drop to -50 below. So ya, like I said. It’s cold.

There’s hard, and then there’s difficult. East Coast skiing is both, and often at the same time. The often atrocious weather isn’t just tough on the body. It’s also tough on the snow pack. So, you better make sure those edges are sharp if you hope to hold one on the bulletproof tundra that pervades the resorts across New England. If it’s that cold, you’d except some firm conditions. But this is a whole new level. Low elevation, fickle temps, and blustering winds batter the mountainsides. Even when a solid storm dumps snow, you best get to it quick before it hardens to glacial density. And pray that the wind doesn’t blow it off it the first place, or that the temps change just a degree and shift to rain. The rain might be the biggest adversary in all honesty. It will literally wash away snow only freeze and continue the cycle of pain.

So you get it, the snow is hard. That sure as hell make it’s difficult. Fast sure. But, you better have your fundamentals down pact. Early edging, weight shifting, pole plants, hop turns, it takes a full toolkit so ski such difficult conditions. And even with all that, sometimes you just need to say F it, and point em downhill bub!

Another East Coast twist for an added degree of difficulty coming from out west was tree skiing. Sure, I’d venture off piste for a little fresh pow or side hit, but our East is a whole new ballgame. Different skis for different trees I suppose. Fifty foot pines, hundreds of years old in Tahoe create mighty big and dangerous tree wells so skiing them slalom style is not an option, it’s a hazard. But here, people ski trees with Mikaela Shiffrin like precision. Weaving through trees at speed for fun. However, unlike the gates on the world cup, these arborous obstacles don’t go down in a collision. You do and likely into one of it’s tightly packed buddies. Again, like I said, it’s hard to ski out East.

Shit snow, poor weather. Did I mention low elevation yet? Or short vert and minimal skiable acreage compared to out west? Skiing here is stupid. SO why do people do it? Are they stupid? Just gluttons for punishment? You would think people would’ve moved, or quit this seemingly pointless eastern pursuit of sliding downhill. The answer is as simple as it is confusing. East Coast skiing is the best skiing in the country!

Bigger’s Not Better, But More Is.

What’s one of the biggest complaints in skiing? I wish I could ski more! It’s what drove the creation of the mega multi resort passes. But not every ski destination needs to be epic or iconic, though we have those too. The East simply has the most and best access to skiing in the country.

By shear numbers, New England has more resorts. Vermont and New Hampshire’s 52 ski areas is more than Colorado and Utah combined (47). Add in another 21 in Maine and it adds up to some serious terrain. Everything from mom and pop ski hills to major and Alterra resorts. All within a couple hours from each other, there’s plenty for everyone! That’s not to say there’s not some traffic and crowds. There are. But, the geography and ease of access is a breeze compared to the nightmare hellscape of the world’s prettiest truck stop that is Colorado’s I-70 on a holiday weekend.

If you want variety, the East is it. Everything from North America’s fastest 8 person chairlift at Sunday River, Cannon Mountain‘s scenic tram, and Mad River’s classic single chair. Bumps, steeps, trees, parks, groomers it’s got it all in abundance. You may have to work a little harder for it. And it’s not going to be knee deep blower pow, but if you want to ski a lot, and often, just sayin we got options.

You’ll hear “Ski it if you can!” a lot back East. It’s two fold. It means go get it if the conditions allow. But, also means you better bring your A game! As I mentioned, skiing here has challenging conditions and terrain. So you have to have the techincal skills down not only to survive but to excel. So, another cliché “Steel sharpens steel” applies to the skiers in New England. Riding here toughens you up and makes you a better skier.

The United States has 47 Olympic Medals in Alpine Skiing many of which have roots in New England. Some of the biggest names in the history of the sport sharpened their edges here. Bode Miller, Daron Rahlves, and even Mikaela Shiffrin learned to race in the East. Classic institutions like Burke Mountain Academy, Stratton Mountain School, Green Mountain Valley School and more consistently groom America’s next generation of champions.

Just this past winter in Beijing, more than 20 US athletes in skiing and snowboarding either grew up in New England or came here to train. That list also includes our only Alpine medalist, Ryan Cochran-Siegle of Vermont who took the silver in Men’s Super-G. So if the best skiers in the country all come from here, then by the associate property of radness, it must mean this is where the best skiing is. Check the math, it adds up.

Skiing is skiing. In most cases it’s like sex and pizza. Even bad skiing is better than no skiing. And sure the mountains might not be huge and the snow conditions are fickle. But, the people that ski in New England are what truly make it the best in the country. It’s a no frills ski community that is supportive and close knit, even by skiing standards. They look out for their own and welcome others. Glen Plake said in a recent episode of The Out Of Bounds Podcast, that one of they keys to success is taking pride in what you do. No one takes that more to heart that skiers in the Northeast.

They do the best they can with what they got and make the most out of every turn. Taking joy in dust on crust as if it was two feet of fresh. Constantly checking if the Sherb is in. And skiing every last spec of snow well into May on Killington’s Superstar glacier. It’s not a luxury sport for jetsetting weekenders here. It’s an obsession and a lifestyle born from ice. There’s an openness to change and adapt, with a deep reverence for it’s storied history. I am sure a circle of Subrau Outbacks would spontaneously appear and duct tape themselves together with coexist bumper stickers if anyone even thought of tearing down Mad River Glenn’s single chair.

So Ski The East, or don’t. No one here cares. We’ll still be doing it as often as we can, for as long as we can. It’s stupid, it’s cold, it’s hard, and it’s the best skiing in the country!

Episode and Guest of the Year Winners!

Episode and Guest of the Year Winners! As we turn the page to a new year, it’s time to look ahead, and look forward to new adventures. But, it should […]